Why Do I Judge Myself???

“Judge Not Lest Ye Be Judged.”

What a difficult lesson to learn!  Unless you’re living in a cave and have no contact with the outside world, then you’re fully aware that the problem of judging is alive and well.  Not only does judging never fix the other person, it actually does a great deal of harm to yourself.

When I was more religious and less aware, I would look around at the people who fell short and scoff at their inability to keep their life in line.  If they fell on hard times, instead of being empathetic and helpful I would make a comment along the lines of, “You made your bed, now you have to lay in it.”

It was especially easy to be judgmental towards the people I didn’t agree with.  For hours on end I would entertain thoughts in my head of endless arguments with these people pointing out their faults and the errors in their thinking.  I scoffed at them.  I talked down to them. I told them to go fuck themselves with enough charisma and authority to make even Al Pacino or Clint Eastwood blush.

The difficulty with trying to lose the judging is it’s so rampantly permeated through our brain.  It bleeds through our mind the way Merlot stains your white carpet after it’s allowed to soak in overnight.  You can try and scrub your mind clean but the problem is the scrubbing can be never-ending.  As soon as you clear one stain of judgment, another is waiting in the wings to take its place. 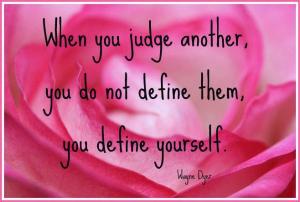 Jesus was a pretty clever guy!  He understood the human condition and our struggle more precisely than any Bible scholar could grasp. In this situation he suggests not to judge for your own sake, not for the sake of your neighbor who you’re judging.  In every recorded interaction that Jesus had with people, he attempted to free the person from the pain of shaming, guilting, judging, or condemning themselves.

With all our technology and all of modern man’s advancements, we seem to be no better off today than we were in Jesus’ day.  I’m afraid that’s because they missed his point back then and we still miss the point today.  The world’s great religions all point to the same truths and are desperately trying to point us into a direction we seem unable to go.

I have to be careful even in the way I write this because I have the natural tendency to judge the well-meaning religious people for missing the point.  When I deliberately walked away from the religion of my upbringing, I went through a negative phase where I judged all religions and all people of different faiths.  My religious dogma turned into nonreligious dogma.  The script I was adhering to had changed but my mind played the same theme song on a never-ending playback loop. The recipients of my judgments changed but my mind still occupied the same prison it always had.

I suggest this was a phase or a season of negativity because my mind has since shifted.  But not everyone makes it completely through the negativity–in fact, very few make it through it no matter what dogma or worldview they subscribe to.

When you first set out to control your judging mind, you can no easier control it than you could stop all the waves of the ocean from crashing onto shore.

Where do your judgments come from?

Where do your thoughts come from?

Where do ideas and inspirations come from?

A while ago I came across the work of Byron Katie.  In Loving What Is she says, “You see who you are by seeing who you think other people are.  Eventually you come to see that everything outside you is a reflection of your own thinking.  You are the storyteller, the projector of all stories, and the world is the projected image of your thoughts.”

I was dumbfounded to say the least! I had to think about that slowly–I see who I am by seeing who I think other people are. Wow! Well at the time–and most my adult life–I was focused on all the negativity and just naturally judged anyone and everyone all around me.  I had never considered the problem was an internal one.  I naively assumed the problem was always external and never my own doing.  The profound lesson that Jesus was trying to convey (and every wise prophet before him and after him) had nothing to do with your neighbor or your brother.  Instead every wise sage understood that whatever you did to your neighbor or brother you were doing to yourself.  If you can believe that everything outside of you is a reflection of your own thinking, then you can see that to judge your neighbor means you’re really judging yourself.

Hate your brother (or sister)? Yup, you hate yourself.

The wisdom of what Jesus mentioned here was advice we all could use on a daily basis.  We are so quick to judge anything and everything around us that we completely miss the truths of our situation.

We judge the Democrat if we consider ourselves Republican.

We judge the Jehovah’s Witness if we subscribe to being Catholic.

We judge PETA or the liberals if we’re an outdoorsman who belongs to the NRA.

We judge the weather when it doesn’t cooperate according to our plans.

We judge the trash man or gas station clerk as though we’re somehow better than them.

We judge the CEO or rich businessman because they aren’t giving enough away.

We judge our spouse because they can’t read our minds and comply  the way we think they should.

We judge our parents because they didn’t raise us how they should have.

We judge our exes because they didn’t love us like we wanted them to.

We judge our children because they refuse our input or make choices without our consent.

We judge the pro-lifer when we’re pro-choice,

the Muslim when we’re Christian,

the black when we’re white,

the gays when we’re straight,

the unemployed when we’re working,

the overweight when we’re skinny,

or the skinny when we’re fat.

It’s an ongoing battle but I believe it’s one we can win if we choose love.  By ferociously loving your neighbor or brother or sister, you are making the clear choice to love yourself along the way.  It won’t be easy, but it will be worth it!

My fellow coworkers sent me off in style with a sugar buzz yesterday. 😊 I'm very thankful for 25 great years at Abbott and all it has provided for me and my family. However, I'm eager and humbled to start the next chapter in my life at Illume Wellness Group.
I'm very excited to announce the opening of Illume Wellness Group in January, 2022.