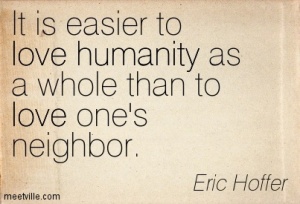 It’s crazy; I sit and watch the clock tick away and I’m guiltier by the minute. I read for a little bit this morning, then made breakfast and sat down for a half-hour show and all of a sudden it’s after 10:00. Next thing I know, I’ll be off to get my son from school at 4:30 and I haven’t completed anything I planned on doing all day. That is not how the day has to go though. I can do things differently. I can write for a while, and then take the puppy for a walk, then clean for a while, then get my son from school. It all can be done with the time I have. As long as I stay out of my head long enough to not get sucked into some vortex of self-pity, I can do what I need to do today with my time.

Interestingly, I find myself yearning constantly about being a successful author who writes life-changing material for people to read. I dream about having long blocks of time to be able to pour my heart out on blank page after blank page. If only I didn’t have my day job I could become rich and famous for putting all these funny and quirky ideas that have been clanking around in my head like marbles in a pump into a readable format for the masses. Instead, I’m a poor helpless victim because I can’t spend the time writing that I wish I could. If only life were fair, I would be able to write every day in my boxers while sipping on coffee in the morning and red wine in the evening. While I’m at it; if life were fair I would be able to eat anything my poor little heart desired without having to deal with the emotional baggage that is making me overindulge in the first place. I should just be able to crinkle my nose like I Dream of Genie and all my issues would be solved. Right?

Unfortunately, life isn’t always fair and life does require something of me. I have to actually show up. I’m not going to randomly get a call from John Grisham’s agent one day and hear: “Yes, hi Travis, this is Agent Jim Doe, I understand you want to be a writer? I can’t wait to read everything you have been writing. You have been writing haven’t you?” That phone call is never going to happen unless I actually have been writing and writing enough to have something to offer the world.

Don’t get me wrong, I have been writing. But if my goal is to be a world-renowned author will I ever get to that point by only writing a paragraph or two every day? Sure, over the course of thirty years I might actually have enough to piece together a decent book, but if I want to enjoy the rewards of a fruitful writing career I have to go at it a little fiercer than a couple of paragraphs per day.

Given the struggle I have with my guilty feelings I mentioned earlier, I won’t become a successful author if I won’t sit down to write on the days I have extra time to sit down to write. Those are the days I can fill page after page until my ears are going to pop since the ideas are flowing fast. But truth be told, if I am dedicated to becoming an author, I need to write every spare moment I can get. I need to give writing so much focus that I can’t think about anything else when I’m awake except writing. If I’m not writing, when will I be able to write next? When I’m falling asleep, what do I plan on writing about when I wake up? Every spare moment I can steal away for the process of writing needs to be utilized in order to become the next great American author.

I may never become the next great American author for many reasons that will never be fully understood. Some authors don’t have the privilege of seeing their ideas supported during their lifetime while other authors experience waves of success that may seem undeserving in comparison. Nonetheless, whether success comes during my lifetime, after I’m dead, or not at all I must sit down and put my ideas on paper.

One of my favorite authors is Eric Hoffer because he worked as a longshoreman in San Francisco by day but wrote nearly a dozen small books throughout his lifetime. He wrote a book that became a bestseller called The True Believer: thoughts on the nature of mass movements. His book was written in 1951 and attempted to answer how people could willingly give themselves to mass movements whether they were meant for good or evil. After Hitler and the Holocaust several people in the world started asking themselves questions about how we could treat one another so despicably. Hoffer did his best to describe individuals who gave themselves completely to mass movements. He says, “Faith in a holy cause is to a considerable extent a substitute for the lost faith in ourselves. The less justified a man is in claiming excellence for his own self, the more ready is he to claim all excellence for his nation, his religion, his race or his holy cause.” 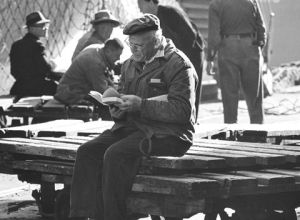 I picked Eric Hoffer as an example because he worked full-time while he wrote his ideas. His sole income didn’t come from his writing and truth be told he probably didn’t make very much money from the books he did publish. Interestingly, though, this full-time longshoreman, part-time author, died in 1983 but his ideas live on many decades beyond him. When I think about being an author who may or may not sustain a respectable income from my ideas, I succumb to the fact that the income I receive is not my main concern. Sure, being rewarded for slapping the keyboard day after day seems like a fair and novel idea but the reward is in the life that was changed that I may never even know about. Decades, even centuries, could pass and the idea that I was brave enough to put down on paper could make a difference in someone’s life and could change the world for the better one person at a time. I may or I may not change the world, but if I don’t at least try I will never know.

Now that I have settled the writing part of my day and one of my reasons for guilt, I can move on to taking the puppy for a walk. Life is good.

My fellow coworkers sent me off in style with a sugar buzz yesterday. 😊 I'm very thankful for 25 great years at Abbott and all it has provided for me and my family. However, I'm eager and humbled to start the next chapter in my life at Illume Wellness Group.
I'm very excited to announce the opening of Illume Wellness Group in January, 2022.